Mesa, Arizona goes back to nearly 2,000 years ago when the Hohokam Native Americans moved here. The Hohokam people built a canal system that were considered some of the most advanced and largest canals of the New World. By 1100 A.D., the water flowing through the canals covered an area of roughly 170 square miles, which allowed the Sonoran Desert to become a place where plant life could thrive. On July 17, 1878, the city of Mesa was registered as a one square mile town. By 1883, the population in Mesa was 300 people. In the early 1940’s, tourism and population growth rose tremendously due to the opening of Falcon Field and Williams Field and with the invention of air conditioning, people were more willing to come down and see the city. Today, with a population of nearly 500,00 people, Mesa is the largest suburb in America and the 3rd largest city in Arizona. Mesa is about 18 miles wide and has an area of 133 square miles.

As mentioned before, the city of Mesa has been growing since the 1940’s when Falcon Field and Williams Field were opened and more military presence was added. Today Mesa has tremendous potential to grow even more with an Apple plant just being added in East Mesa and an Intel plant in the nearby city of Chandler. The Apple Plant is called the Apple Global Operations Center and is located on the Northeast corner of Eastmark.
Eastmark is the number one best-selling master planned community in Arizona. The community itself is home to 14 schools including the Arizona State University Polytechinc Campus and the Chandler-Gilbert Community College Williams Campus. It has 10 churches throughout the community and easy access to nearby shopping malls and grocery stores. The community is expecting much more to be added like additional schools, including an upcoming preschool, nearby hotels and resorts, and more commercial buildings. It is also hoped, that with Apple as its anchor, the area will attract more high-tech businesses and thus, create more jobs. East Mesa has a goal of becoming the next high-tech corridor, along the lines of Silicone Valley in California and Austin, Texas.

Mesa has been growing and expanding very rapidly. Since 2010, the city has been expanding by a rate of 11.1%. By the year 2021, the population is expected to hit 505,000 people. Today, the average household income for Mesa, Arizona is $65,000. The top employers in Mesa are Banner Health System who currently employ around 10,000 people a year in the city of Mesa alone. Boeing recruits nearly 5,000 residents a year.

Mesa is a popular destination for outdoor activities. Local residents and visitors love coming here for our beautiful golf courses and gorgeous hiking trails with breathtaking views. Superstition Mountains are one of the most popular hiking destinations near the city. Mesa is home to many shopping centers including the Fiesta Mall, Mesa Riverview, and Superstition Springs Business Park. Mesa Riverview is located in the northwestern part of Mesa and includes stores lie Bass Pro Shop, Home Depot, Cinemark Theaters and much more. The Fiesta Mall is located in the western part of Mesa and the mall is currently planning to be expanded. Superstition Springs Business Center includes a shopping mall, and outdoor amphitheatre, and stores like Target, Sports Authority and others.

Mesa is home to a water park named Golfland Sunsplash. The park itself is broken up into two separate parks. Golfland has three miniature golf courses, an indoor arcade, a go-cart track, bumper boats, and more and is also opened year round. Every year they do an indoor haunted house for Halloween. Sunsplash operates only in the summer and has almost 30 water-based rides. In, 2014 the park added a new slide called Double Dare, where two people race in parallel body slides that start off using the ProSlide Technology’s SkyBox door trap. Mesa is home to several museums and centers. The Mesa Arts Center is a performing and visual arts center in downtown Mesa. The $95 million dollar complex, which was completed in 2005, is the largest comprehensive arts campus in the state. The center encompasses four performance venues and is also home to the Mesa Contemporary Arts, which has five art galleries. Some of the museums throughout the city include the Mesa Historical Museum and the Arizona Museum of Natural History.

Mesa is home to Mesa Community College. MCC is the largest of the Maricopa Community Colleges, and currently enrolls over 24,000 full-time and part-time students. Mesa Public Schools is the largest public school district in the state. Roughly, 64,000 students attend these schools. The schooling district is home to 55 elementary schools, nine junior highs, six high schools, and several alternative schools. Mesa is also home to the Polytechnic campus of Arizona State University. This campus has nearly 6,000 students pursuing in scientific and engineering fields. Mesa also has a Mesa campus of Northern Arizona University.

Arizona is definitely hot in the summer, but the desert is actually very beautiful and the Phoenix and Mesa areas offer endless outdoor activities that are enjoyed by locals and visitors alike. From world class golf courses, to breath taking mountains and hiking trails, to beautiful museums, there is plenty to do in Mesa.  If you want to live here, home prices are reasonable, education is good, and there are plenty of jobs, with an even brighter jobs forecast.  Mesa is a great place to call home. 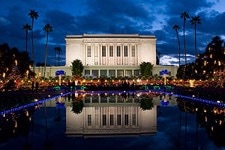